This article contains affiliate links. If you click on a link in this article, I may earn a small commission at no extra cost to you.

First things first: wishing everyone a very happy and healthy 2021!

Okay, let’s dive in. If November was a crazy month for crypto, December was absolutely mind blowing. On the positive side, Bitcoin dominated the field and received a ton of attention, driving up the price +$10k per BTC in just one month.  On the negative side, news from the SEC late in December caused XRP’s price to absolutely plummet.

With this month’s update, we wrap up three years of tracking this group of cryptos!  Bitcoin, XRP, Ethereum, Bitcoin Cash, Cardano, Litecoin, IOTA, NEM, Dash, and Stellar – some famous, some forgotten, some fading, some resurging – regardless of how we might feel about these cryptos today, these were some of the most popular, most talked about, and most promising coins on January 1st, 2018 (or at the very least the most valued by market cap).

Three years later: Bitcoin has been joined by Ethereum as one of only two cryptos to have at least broken even (Bitcoin handily, ETH just barely). And after nearly three years of waiting, BTC is now easily beating the returns of the S&P 500 over the same time period (much more on that below).

Question of the month year:

In March 2020, Bitcoin hit a low of approximately:

Scroll down for the answer.

Lots of movement in December, mostly down, as altcoins struggled to keep up with Bitcoin. The one upward exception, NEM continued to surprise by gaining one place, up from #19 to #18.  As mentioned in last month’s update, this is possibly related to the 1:1 XEM/Symbol Airdrop that’s coming in February 2021.

Any other movement was downward this month: after battling Tether for third place for much of the second half of the year, XRP dropped one spot to #4.  Bitcoin Cash fell from #5 to #6, and after nearly clawing itself back into the Top Ten, Stellar came back to earth a bit in December, sliding from #11 to #15.

Top Ten dropouts since January 2018: After three years of the 2018 Top Ten experiment 40% of the cryptos that started in the Top Ten have dropped out.  NEM, Dash, IOTA, and Stellar have been replaced by Binance Coin, Tether, LINK, and most recently, DOT.

Or, using a glass half-full lens: over the last three years, 60% of the 2018 Top Ten cryptocurrencies (BTC, ETH, XRP, BCH, ADA, LTC) have managed to maintain their relative position in the market.

Interestingly, even with slightly different players, this is the same percentage (60%) of position holders as the 2019 Top Ten Portfolio. And the 2020 Top Ten Experiment group has performed only marginally better (70% remaining/30% dropout rate).

Given the unpredictability and progress in the cryptocurrency space over the last three years, a 60% retention rate for the 2018 Top Ten is pretty remarkable.

Which held and which lost the most ground compared to its peers?  Thirty six months in, Bitcoin has been the most steady crypto, never losing its frontrunner status, always locked in the #1 position.

IOTA has dropped the most in the last three years and its final 2020 ranking of #37 places it in danger of becoming the first 2018 Top Ten crypto to fall out of the Top Forty.  As a reminder, IOTA was ranked #7 three years ago.

After three years, the table below will give you a good sense of the winners and losers over the first thirty six months of the 2018 Top Ten Experiment. 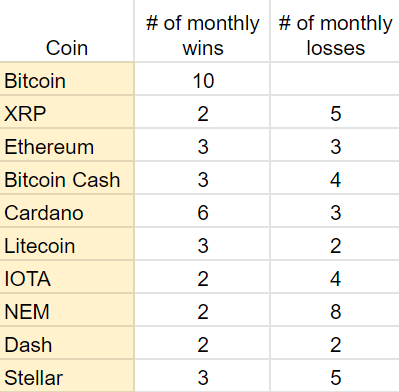 Bitcoin reigns supreme here as well, with the most monthly wins (10).  Cardano has the second most victories, racking up 6 monthly wins in three years. NEM has lost 8 months, the most out of the 2018 Top Ten group. And Bitcoin is unique as the only cryptocurrency that hasn’t lost a month yet since January 2018 (although it has come close a couple of times).

Just last month, it happened: for the first time in the nearly three years since the beginning of the 2018 Top Ten Experiment, I was happy to report that the $100 invested into Bitcoin on January 1st, 2018 was returning more than if invested in the US stock market as measured by the S&P 500.

This has NOT been an easy or straightforward road for Bitcoin.  At one point, a year into the Experiment, BTC was down -74% compared to an S&P return of 1.2% at the time.

At the three year point in the 2018 Experiment, ETH joins Bitcoin as the only other crypto in the green: Ethereum is now +2% since January 2018.

A distant third, but apparently next in line to break even, is Litecoin, currently down -42%.

Pop that Champaign, time for a celebration!

Maybe not full scale ticker tape parade time just yet, but this marks the psychologically important “halfway back” point for the 2018 Top Ten Experiment and represents the highest overall return since April 2018.  Although not pretty, the direction is encouraging: check out the Monthly ROI table below for a bird’s eye view of the 2018 Top Ten ROI journey.

At the bottom are a couple of cryptos that have lost at least 90% of their value in three years: Dash is down -90% and IOTA has lost -91% over the life of the experiment. The initial $100 invested in IOTA three years ago is worth $8.21 today.

After gaining a massive $182B in November, the total crypto market cap added another $193B in December.  For the second month in a row this represents a higher level than when the 2018 Experiment started three years ago. Up +35% since January 2018, it is approaching the 41% return of the S&P over the same time period.

A big, big leap for BitDom this month, ending 2020 at 70.4%.  For context, this is just barely below the Experiment’s record level of 70.5% back in September 2019.  It will be interesting to see how much higher BTC dominance can go. Since the beginning of the experiment, the range of Bitcoin dominance has been quite wide: from the current 70% high to a low of 33% in the first month of the 2018 Experiment.

The 2018 Top Ten Portfolio gained about $78 bucks in December and finally arrived at the halfway back point.  If, after three years, I cashed out of all the cryptos today, the $1000 initial investment would return about $513, down -49% from January 2018.

For some perspective, here’s a look at the ROI over the life of the experiment, month by month, over the last three years:

Although the three year return of the 2018 Top Ten are abysmal, there are reasons I don’t stop believing we could eventually see green: the portfolio is trending in a positive direction, the -49% is a level that hasn’t been seen since April 2018, and the 2018 Top Ten Portfolio is a far cry from the absolute bottom (back in January 2019 when it was down -88%).  Whether or not BTC is going to single handedly have to drag the entire portfolio up without any real help from the alts remains to be seen…

That’s up about +87% on the three combined portfolios, compared to +72% last month.

Here’s a table to help visualize:

That’s an +87% gain by investing $1k on whichever cryptos happened to be in the Top Ten on January 1st for three straight years.

But surely I would have done even better if I went all in on one crypto, right?

Let’s take a look.  Only five cryptos have begun each of the last three years in the Top Ten: BTC, ETH, XRP, BCH, and LTC. Which one wins?

XRP, while still up in 2020, would have been the worst three year all-in bet, at -31%.  And at this point in the Experiments, the +87% gains of the Top Ten Index Fund approach is outperforming a hypothetical all-in investment in both XRP and BCH by a healthy margin.

I’m also tracking the S&P 500 as part of the experiment to have a comparison point with other popular investments options. The S&P 500 Index continued upward reaching yet another new all time high in December. It ended 2020 up +41% since January 2018.

The initial $1k investment into crypto on January 1st, 2018 would have been worth about $1410 had it been redirected to the S&P.

But what if I took the same invest-$1,000-on-January-1st-of-each-year approach with the S&P 500 that I’ve been documenting through the Top Ten Crypto Experiments? Here are the numbers:

That is up +36% since January 2018 compared to a +87% gain of the combined Top Ten Crypto Experiment Portfolios.

You can compare against five individual coins (BTC, ETH, XRP, BCH, and LTC) by using the table above if you want.  The key takeaway? The S&P 500 is currently outperforming XRP and is returning about 5% more than Bitcoin Cash.  The ROI is much better with BTC, ETH, LTC and the 2018 Top Ten Portfolio approach.

Here’s a table summarizing the three year ROI comparison between a Top Ten Crypto approach and the S&P as per the rules of the Top Ten Experiments:

Hard to believe I started tracking these cryptos three years ago.  With so much constantly happening almost hourly in the space, that’s like 100 years In crypto-time.

The back end of 2020 turned out to be some of the most exciting months of the experiment so far, but sticking this out has not always been easy.  About half the time (16 months to be precise, just counted) the portfolio has been in the -80s% range.  Despite long periods of hopelessness, I would say it’s always been interesting – and has kept me engaged during both the bull and bear periods, as I hoped it would.

Although these cryptos may not be the most talked about anymore and I try my best to be impartial, I have to admit I have a soft spot for the original Top Ten from 2018.  Watching NEM attempt a comeback after being left for dead, IOTA failing (at least to this point) to deliver its tangled future, old timer Litecoin dropping out of the Top Ten…then catapulting back in, Stellar’s rise, fall, and rise…it’s been fun.

Some interesting questions remain:  will this 2018 Top Ten portfolio ever get back in the green?  If so, is it going to be Bitcoin and Ethereum dragging the rest in tow, or will some of the alts pitch in to contribute?  Which of these popular 2018 cryptos will truly be buried, which will resurface? Interesting days ahead.  I invite you to stick around and enjoy the journey with me.

Thanks and the Future of the Experiments

Thanks for reading and for supporting the Top Ten Crypto Index Fund Experiments over the years! It’s been a blast interacting with everyone, especially beginners – feel free to reach out if you have any questions.

As for the future of the experiments?  Full steam ahead.

All the best in your crypto adventures in 2021!

And the Answer is…

Help keep the lights on at the Top Ten Crypto Index Fund Experiments.

Thank you for subscribing! Please check your email for further instructions.